Kalishta village belongs to the Kavochevtsi municipality and is 9 km from its center. It is situated on the southern-most heights of Chetna gora and on the northern foothills of Konyavska Mountain. Close to the village is Pchelina dam.

One of the most enthusiastic survakari in the village is the leader of the group. He started participating in Surova when he was still a child, at the age of seven. He masked together with his older brother, who was also the group’s leader before him. The whole family participates in Surova. His son was only 2 years old when they disguised him as a little leader – kokorbashia. His daughter carries the signboard of the survakari group.

“For the last 20 years I have been the leader of the group. In the time when my brother was the leader, I conducted the bell-wearers. I had also disguised like a “priest”. We make the masks together with my brother, but some other people help us too. Every year we prepare some new mask, there always should be something new. For example, we have a mask from feathers, which represents the sun. You haven’t seen a “sun” anywhere else! We have also masks of various animals – we have a mask of a deer, lions, tigers, wolves. Our masks are about 2–3–4 meters. We have bears as well – a brown bear, a white bear, panda, we have bear cubs. There are no prettier bears from that of Kalishta…

The tradition of Surova in Kalishta village exists from times immemorial. On the evening of 13 January, we set a fire and dance around it. Then we meet with the group from Lobosh village. We perform a big chain dance (horo) at the railway station. On that same evening, we visit the lower part of the village. On the morning of 14 January, we start at about six o’clock and continue going around the upper part of the village. The village is big and the people are used to that situation.

We inevitably visit all the houses where there are inhabitants. We are careful not to miss someone, because people are offended and afterwards ask us “Why didn’t you come?” The tradition is like that and everybody is waiting for us to visit their home.

On Surova we perform the ritual “wedding”. We perform the “wedding ceremony”, the bear “mauls” the householder (the host), we jungle the bells to “drive away the evil powers” and like that. The hosts gift us with money, wine, meat, rakia (brandy), sweets, banitsa (cheese pie).”

The leader of the group says that they are about 60 participants in the village, and sometimes they could even reach 75–80 people. The group has 60 pairs of bells, and he himself has 105 bells. The weight of one full set is over 70 kg.

At Surova everybody, who are from the village but live in the towns, by all means come back in Kalishta. They take a leave or sick-leave. Girls, boys – all of them come back in the village. Some years ago, when he still went to school, the current leader did not go to an exam, since it was appointed on 14 January (on Surova). He passed his exam later…

Every year, the leader of the survakari and his family prepare themselves and cheerfully take part in the feast because they believe that “the tradition in the village should be maintained!”. 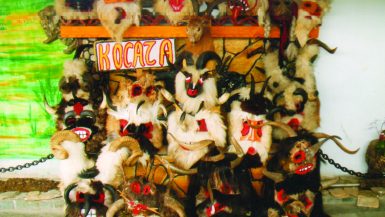